The matter at hand?

To curb fronting in BEE ownership transactions, the BEE Commission has issued a non-binding Practice Guide which states that only the “Flow-through Principle” and not the Modified Flow Through Principle would apply to EMEs and QSEs.

The B-BBEE codes state the following:

3.4.1 A Measured Entity applying this Modified Flow-Through Principle cannot benefit from the Exclusion Principle.
3.4.2 The Modified Flow-Through Principle applies to B-BBEE owned or controlled company in the Ownership of the Measured Entity.
3.4.3 In calculating Exercisable Voting Rights under paragraph 2.1.1, and Economic Interest under paragraph 2.2.1 of the Ownership scorecard the following applies:

3.4.3.1 Where in the chain of Ownership, Black people have a flowthrough level of participation of at least 51%, and then only once in the entire ownership structure of the Measured Entity, such Black participation may be treated as if it were 100% Black.

3.4.4 The Modified Flow-Through Principle may only be applied in the calculation of the indicators in paragraphs 2.1.1 and 2.2.1 of the Ownership scorecard.

In all other instances, the Flow-Through Principle applies. This indicates that there is an extra benefit to a black owned (at least 51% black owned and controlled company) in having shares in your company. That benefit will manifest itself in the calculations of certain indicators on the ownership scorecard.

The modified flow-through principle may only be applied once in a chain of companies/ the group structure.

In terms of this principle, an entity in which black people enjoy more than 50 per cent of the economic interest and exercise more than 50 per cent of the voting rights is treated as if it were 100 per cent black owned.
Any ownership rights held by such an entity in a subsidiary will be deemed to be in the hands of black people regardless of the fact that some of the ultimate owners are not black. 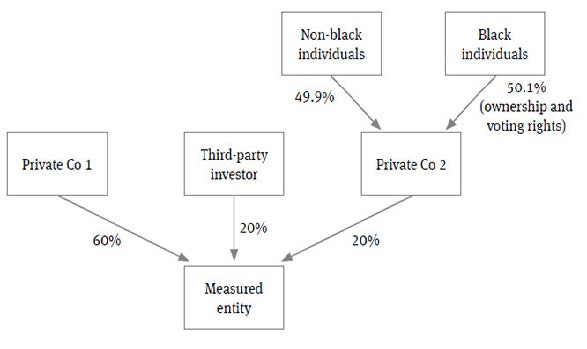 Black people have a 50.1 per cent shareholding (comprising both economic interest and voting rights) in Private Co 2. By applying the modified flow-through principle, Private Co 2 may be deemed to be 100 per cent black. The measured entity would, therefore, have a 20 per cent shareholding by black people.
BEERSA Flyer – 29 June 2018 – Understanding the modified flow-through principle